Just wanna look at all the photos instead? Check here

I've wanted to create a custom bike for awhile. My current bike is 16 years old!! and due for retirement.

Wanting something unique but semi affordable I settled on the Cannondale Bad Boy. 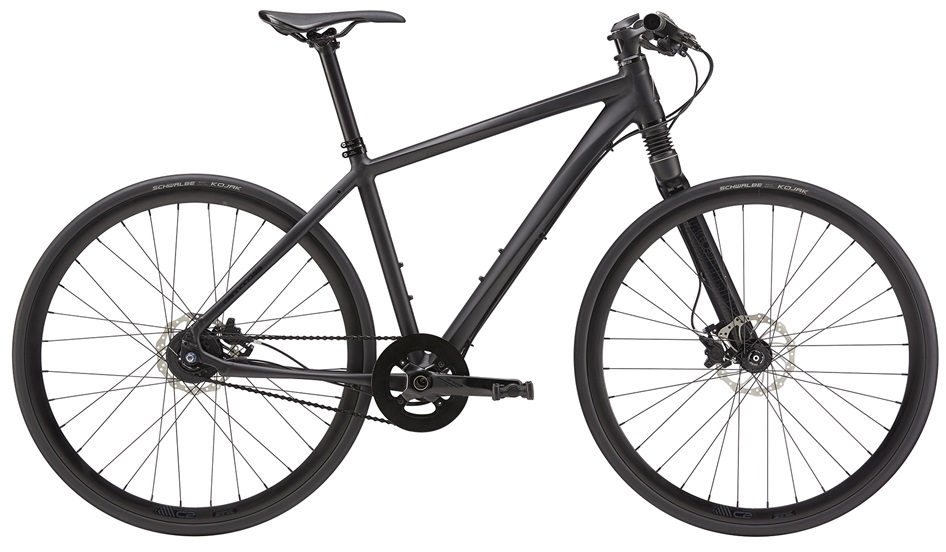 I love the angles on this, the internal hub, how bloody fast it is compared to my old bike and I think it has the potential to become a really nice custom bike.

I bought it from Bespoke cycles in Bayswater who were fantastic and more than willing to strip the bike down for me and then put it all back together once I had finished drawing all over it. They are worth checking out if you are in Perth and looking for this kind of thing.
Here is me with my bike frame necklace. 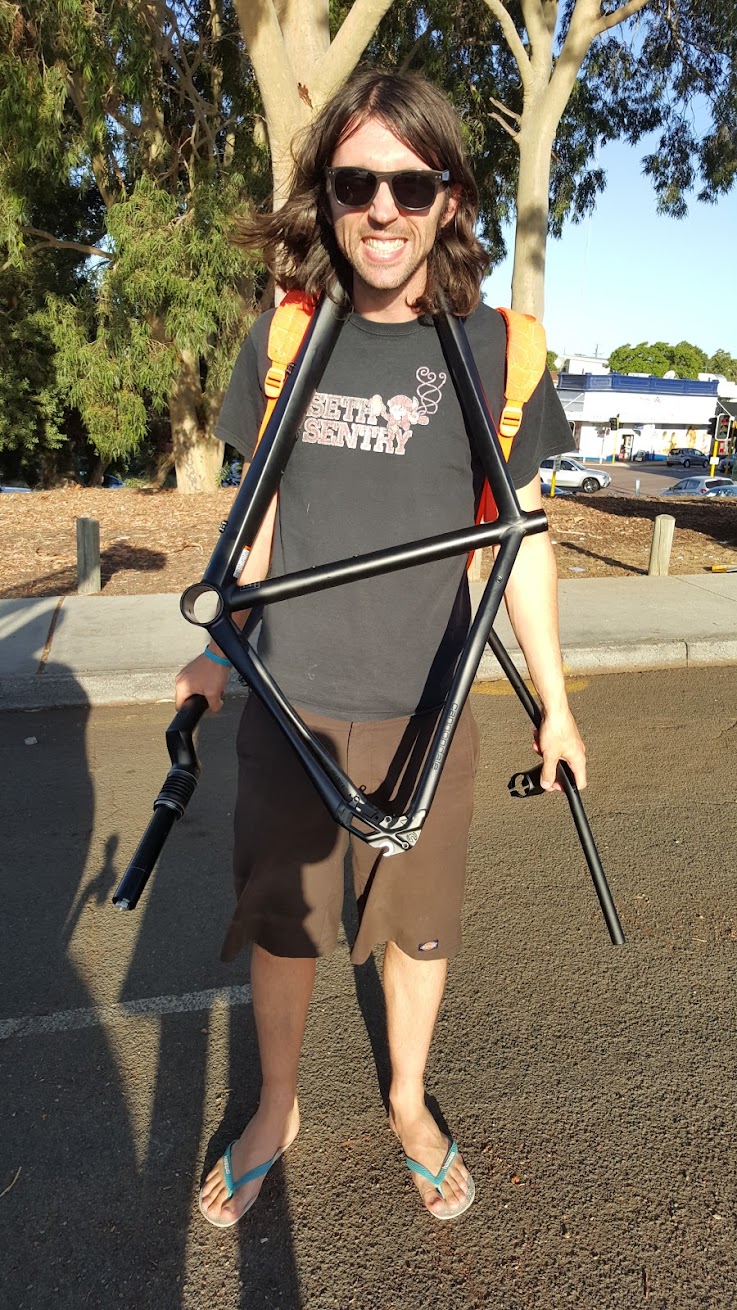 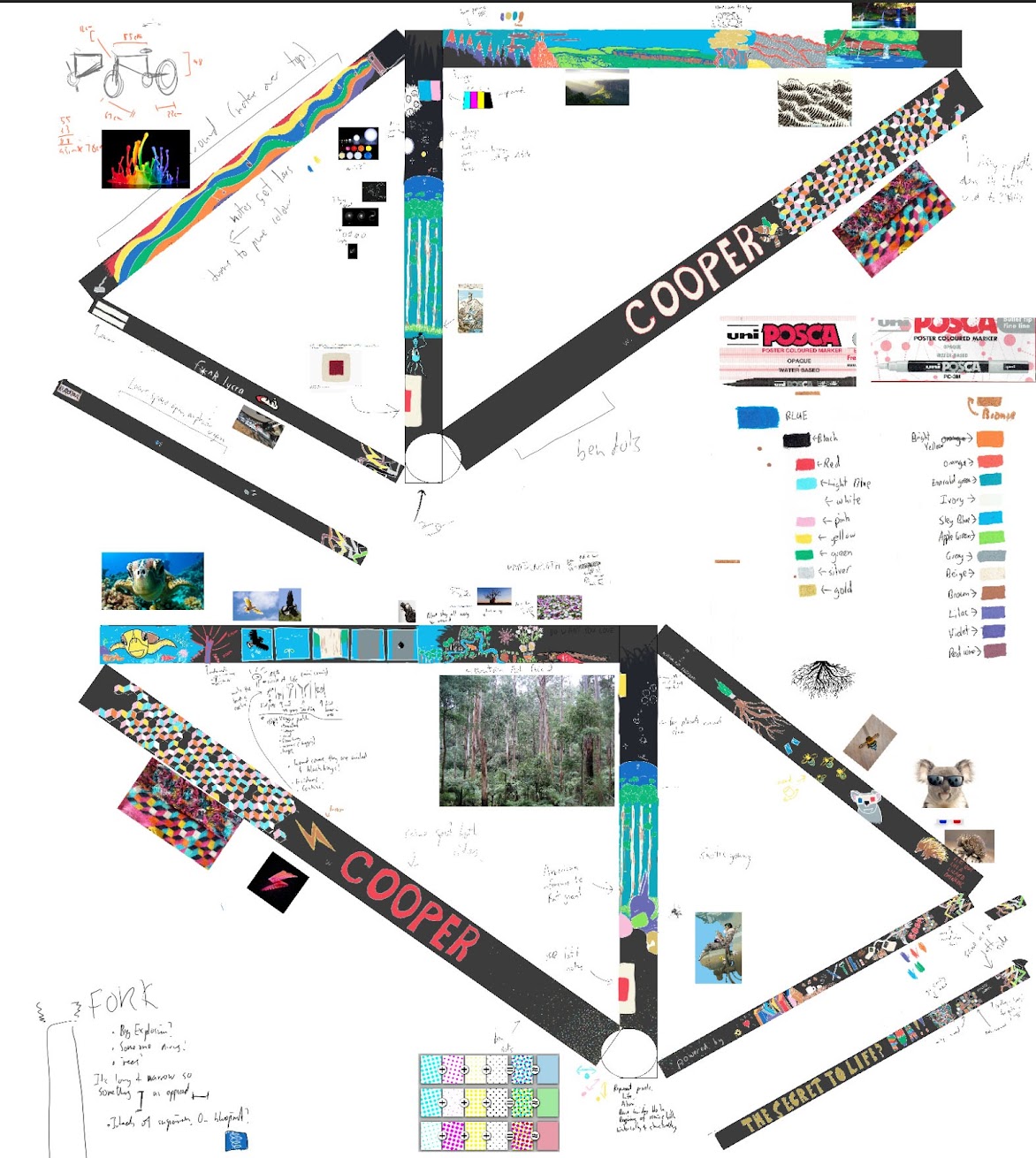 After a lot of research it became apparent it wasn't as easy as just slapping some pen marks on my frame and calling it golden.

Before I could start drawing I had to come up with a plan. I took all the measurements of the frame and drew a mockup, to scale, in Photoshop. It is pretty basic but will do the job. 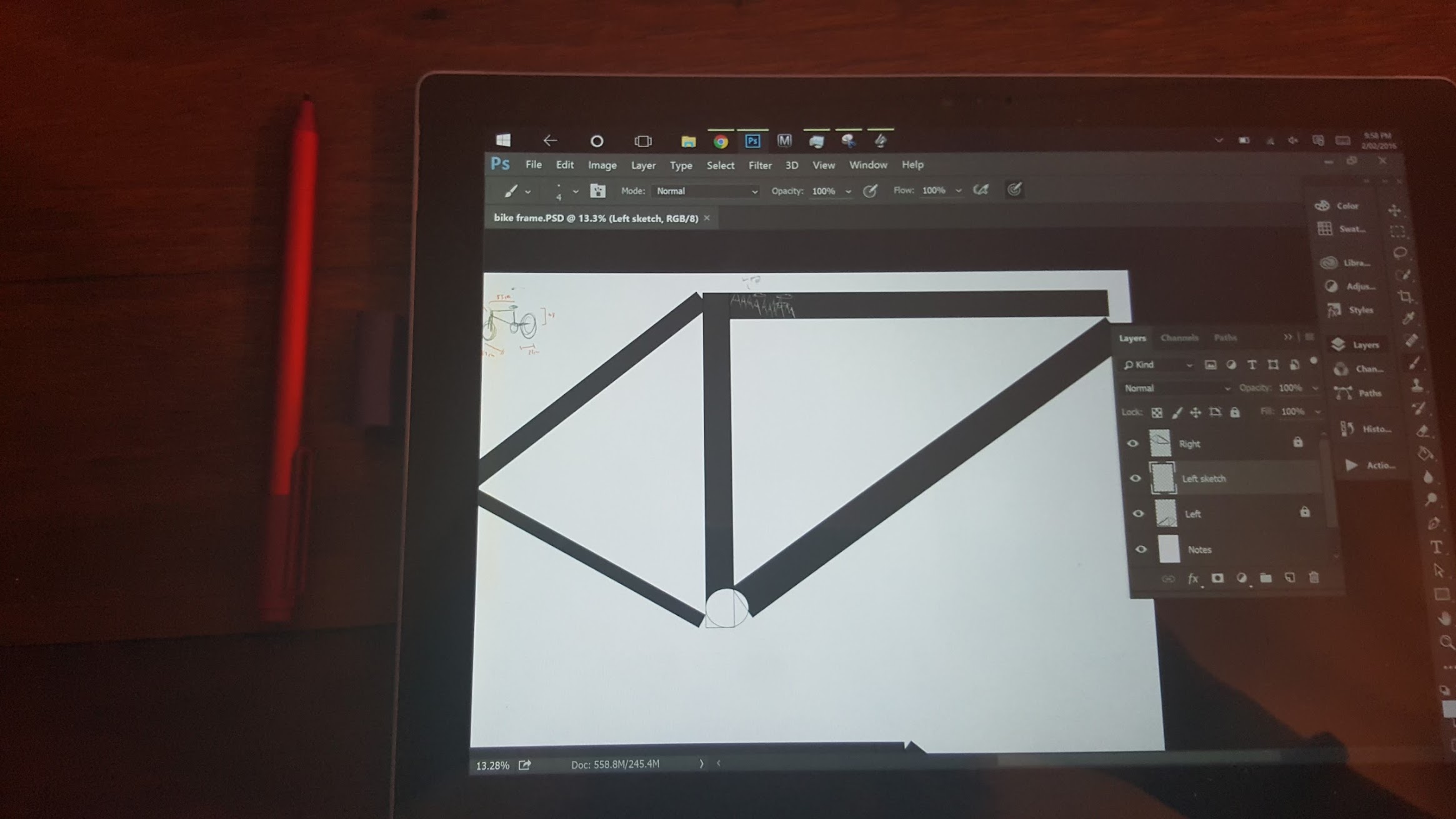 There is tonnes of personal stuff in this drawing, from cockies, Echidnas and koalas (being my favourite animals) to my favourite places and the themes of my life. Most of it is easy to pick out but I wanted to highlight a few of the harder to understand bits. 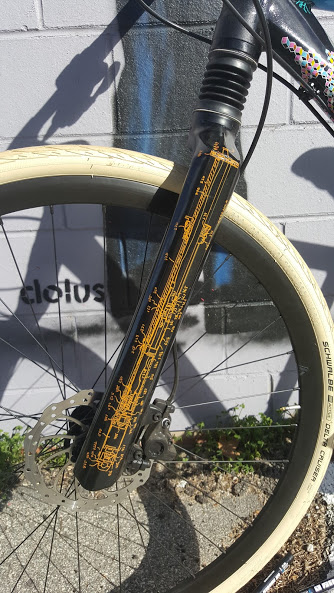 This is a technical drawing based off the original 1991 patent filing by Cannondale for a one sided suspension. If you look closely you might be able to spot the spring. I wanted to show a kind of x-ray of the original shock absorber designed by Cannondale and also to be a little homage to all the engineering sweat that has gone into making the modern bicycle a marvel of engineering. 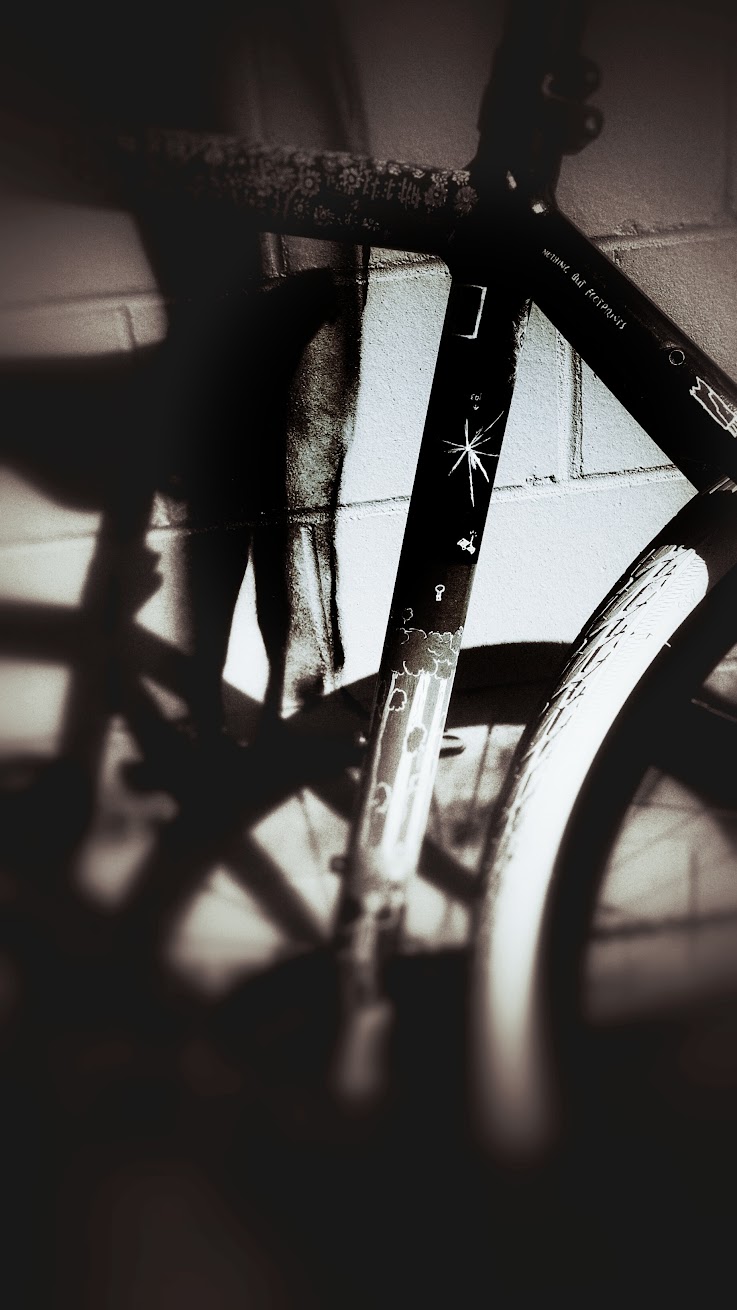 Dedicated to all scientists and explorers who continue to push the boundary of what is possible and what is known.

Based off the plaque on the Pioneer 10/11 space probes, it shows the nearest 14 pulsars to our solar system and our position within the galaxy. Thanks Carl Sagan :) 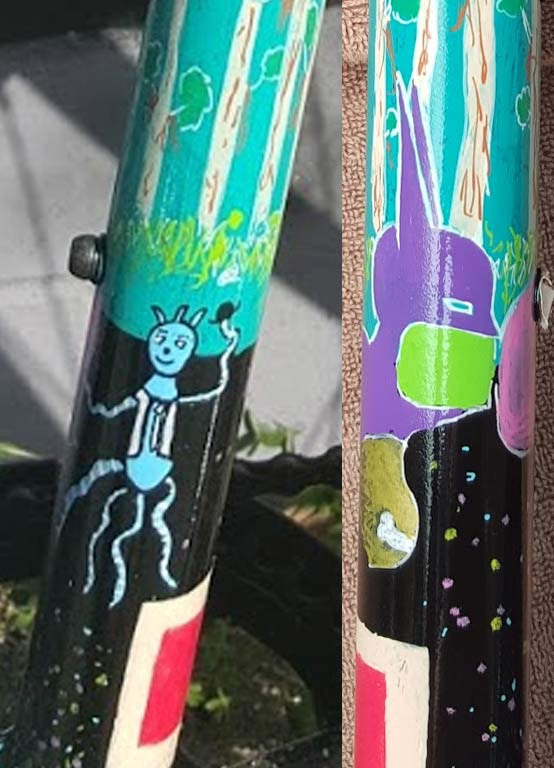 I love Australian and American comics. This is a representation of both. Pat Grant's Blue is my favourite book of all time. On the left of the above photo is a character from his amazing comic. Check it out.

The Right is a crazy coloured Batman blowing bubblegum. It is a play on the comic Saga's awesome cover and well who doesn't love Batman.

These are my two biggest influences on my drawings. They were placed on opposing sides of the frame, near the bottom to symbolise my fuel through inspiration and how they are both unique. Oh Shameless plug, check out my comics at trenhoward.net :P

The red and beige square is a homage to the Australian Divisional Cycling Company from WW1 that operated under aweful conditions and have been largely forgotten to history. 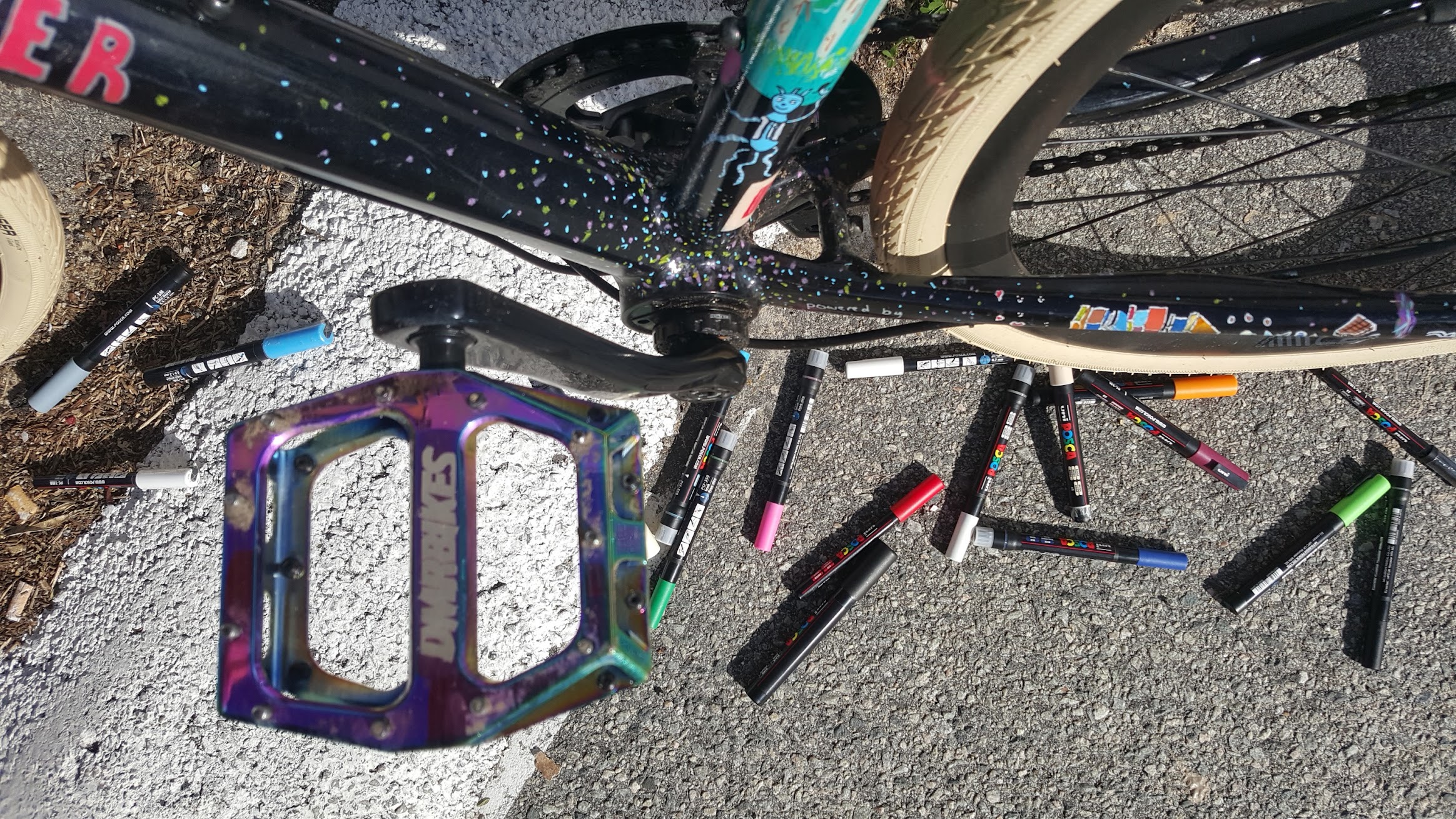 The pedals represent what I believe is the best way to solve climate change related transportation issues which is through pedal power. More bikes, less cars.

The dots on the bottom bracket are the building blocks of comics, Ben-day dots. These are the basis upon which comics were originally created by printers dropping tiny little droplets of colour onto paper. Seen from a distance they merge into a flat colour. 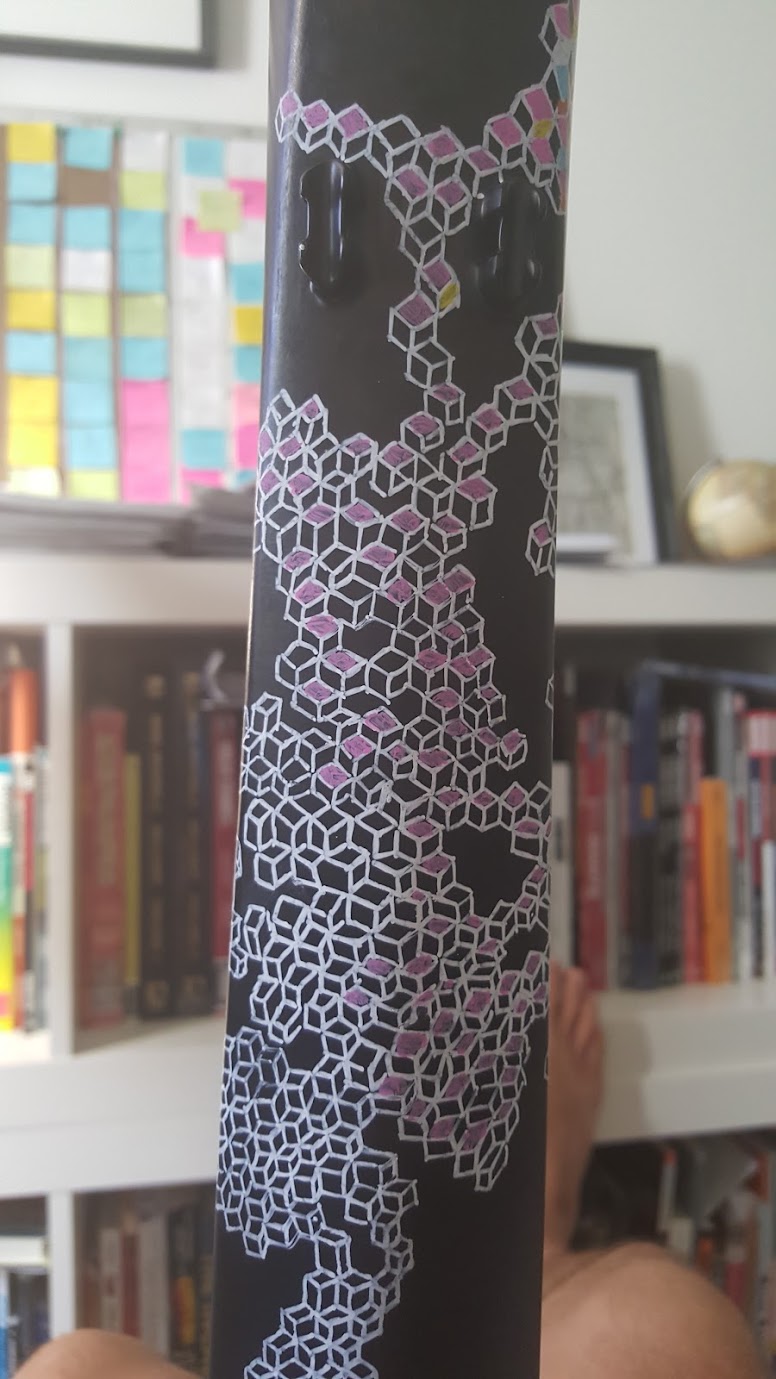 These squares are based off the socks I wore on my wedding day. As you can see i've only just started in the above photo. Also cause Rissy let me get this bike and she is pretty rad. 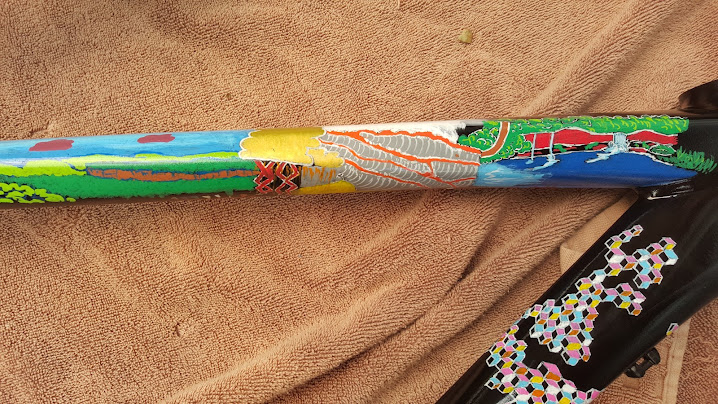 On the right is Karijini (fern pool), one of my favourite national parks in Australia and on the left is the blue mountains. 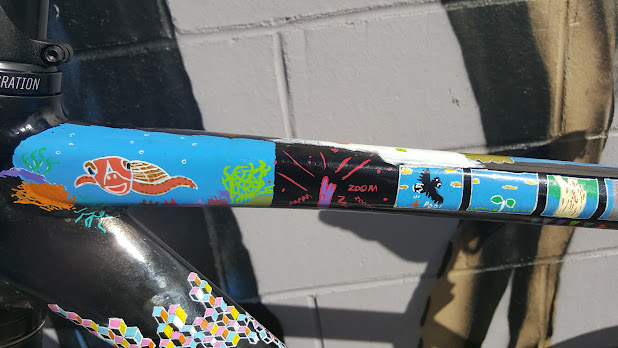 Ningaloo Marine park is in my opinion better than the great Barrier reef. Next to that is a left hand because i'm left handed. 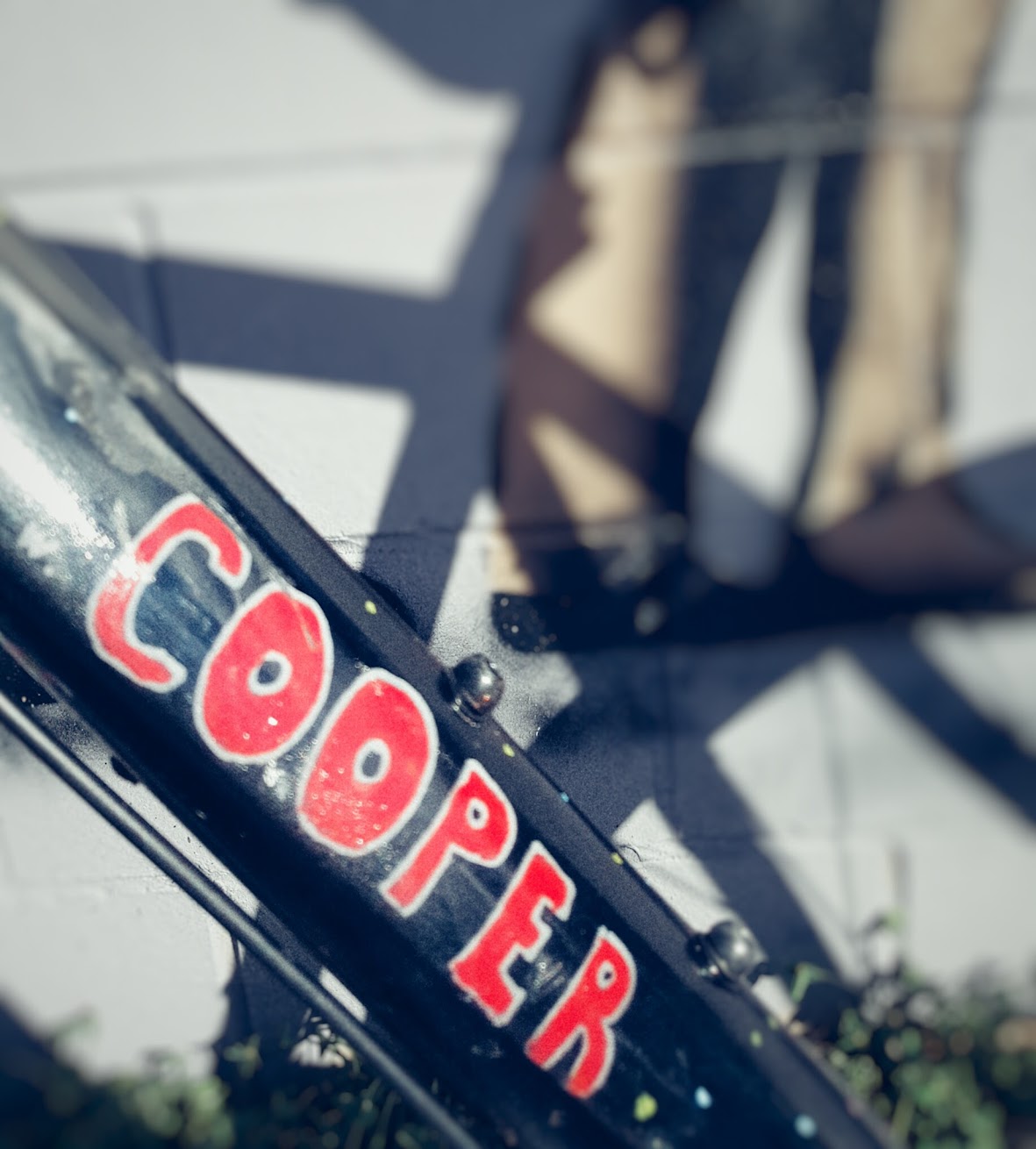 W.Cooper or Cooper for short. Named after William Cooper.
Indigenous issues and advancement are themes that are close to my heart. I'm currently exploring them in my comic Death of the Commons. It also feels like a special time in history as if Australia is finally growing up and owning our past treatment of our indigenous brothers and sisters. With the rise of the Recognise movement I wanted to do my small part in reconciliation and naming my bike after an unsung hero of the advancement of Indigenous peoples just felt right. Also I don't mind Coopers beer (although no relation to William).

Brookes B17 special with copper

Skull tubecaps (yet to come in)

Lightskin (yet to come in) 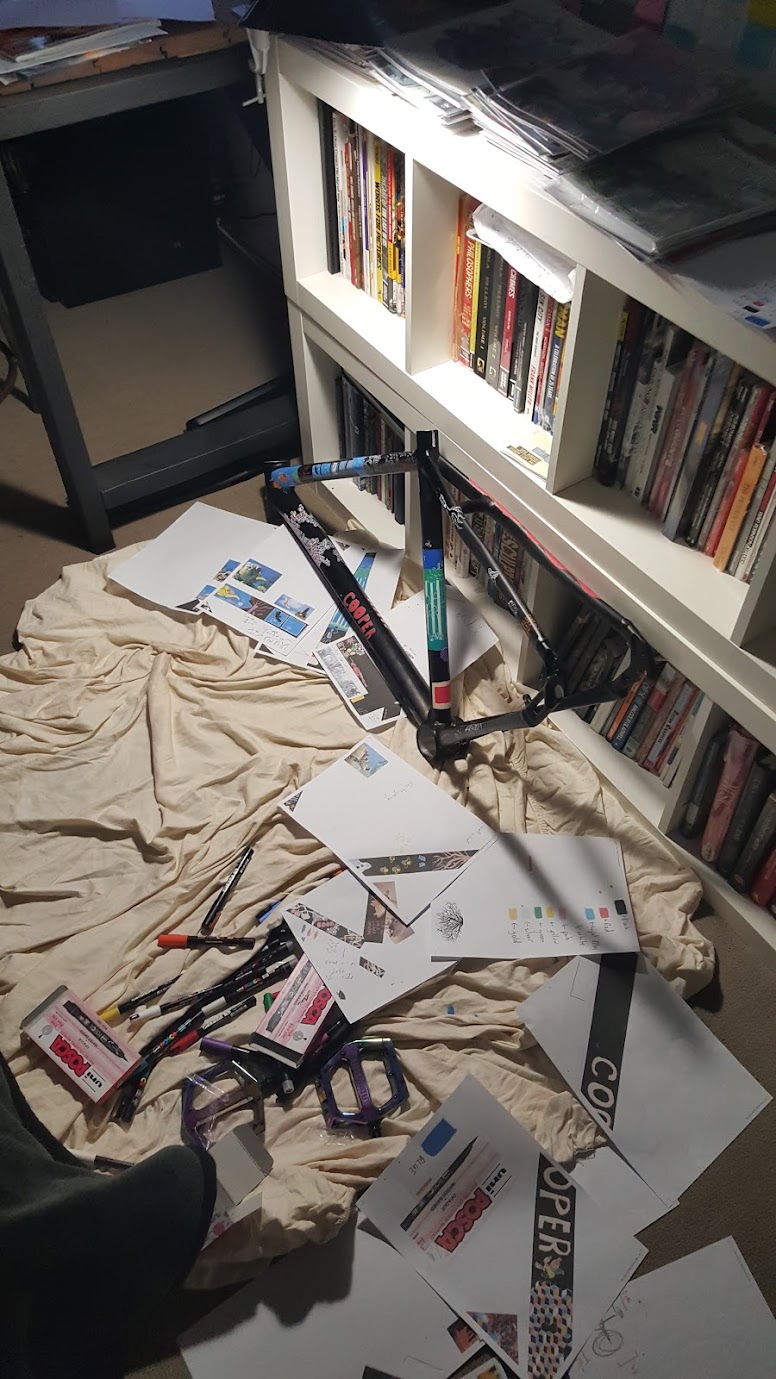 I'd estimate it at 30-40 hours of work to draw it all on the bike. After alot of research I settled on Posca Markers. They worked really well. Artmarkers.com.au I would recommend as they turned up promptly and I had no issues with them. 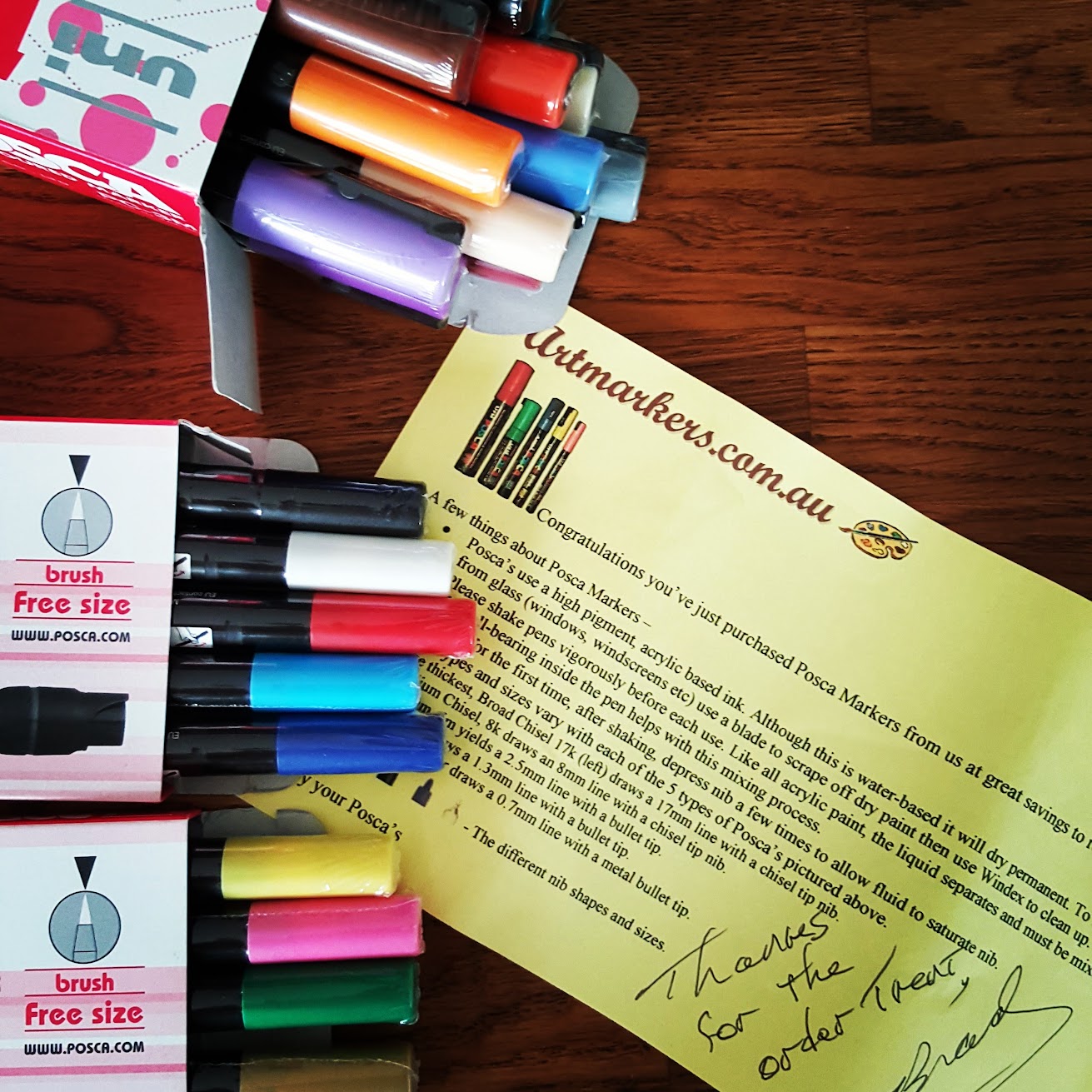 If you want to do this yourself, strip down your bike to just the frame. Lightly sand it back (you need something for the pens to stick to), wipe down and allow to dry. I did my entire mockup to scale in photoshop so I knew what I was drawing where. Next I printed it all out again to scale to make my job easier. You can kind of see it two photos above. At this stage I would recommend testing it on an old bike if you have that luxury.

for sealant I used Rust Guard by White Knight. I went through a good 8 cans of this stuff. Tape off any open holes or springs as you don't want the spray getting on anywhere else other than the outside of the frame. Below is the rig I jimmied up to hold my frame while it got sprayed. 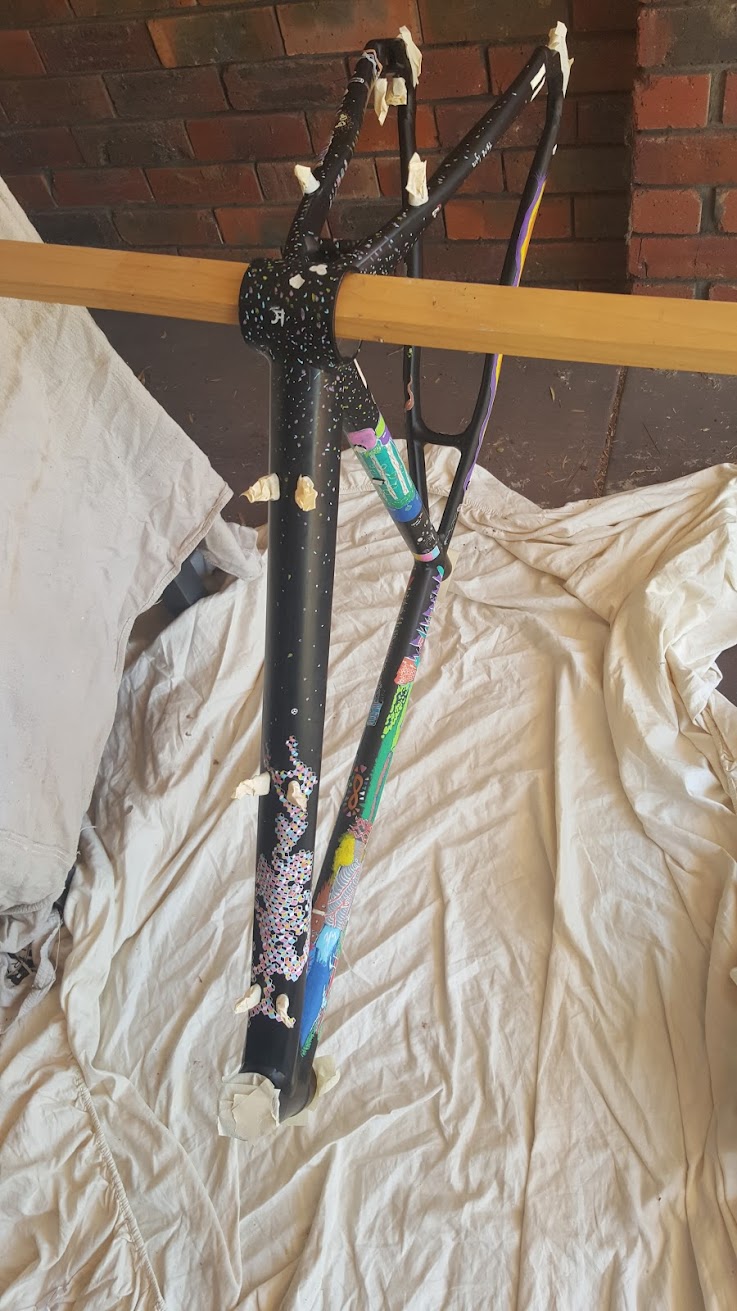 It was alot of fun to build this and I'd like to thank Karissa for all her patience (I did it on the first week of our honeymoon!). Also the guys at Bespoke cycles for stripping down the bike for me.

Thanks for reading, now go out there and create some custom bikes. The world has enough boring pushies! 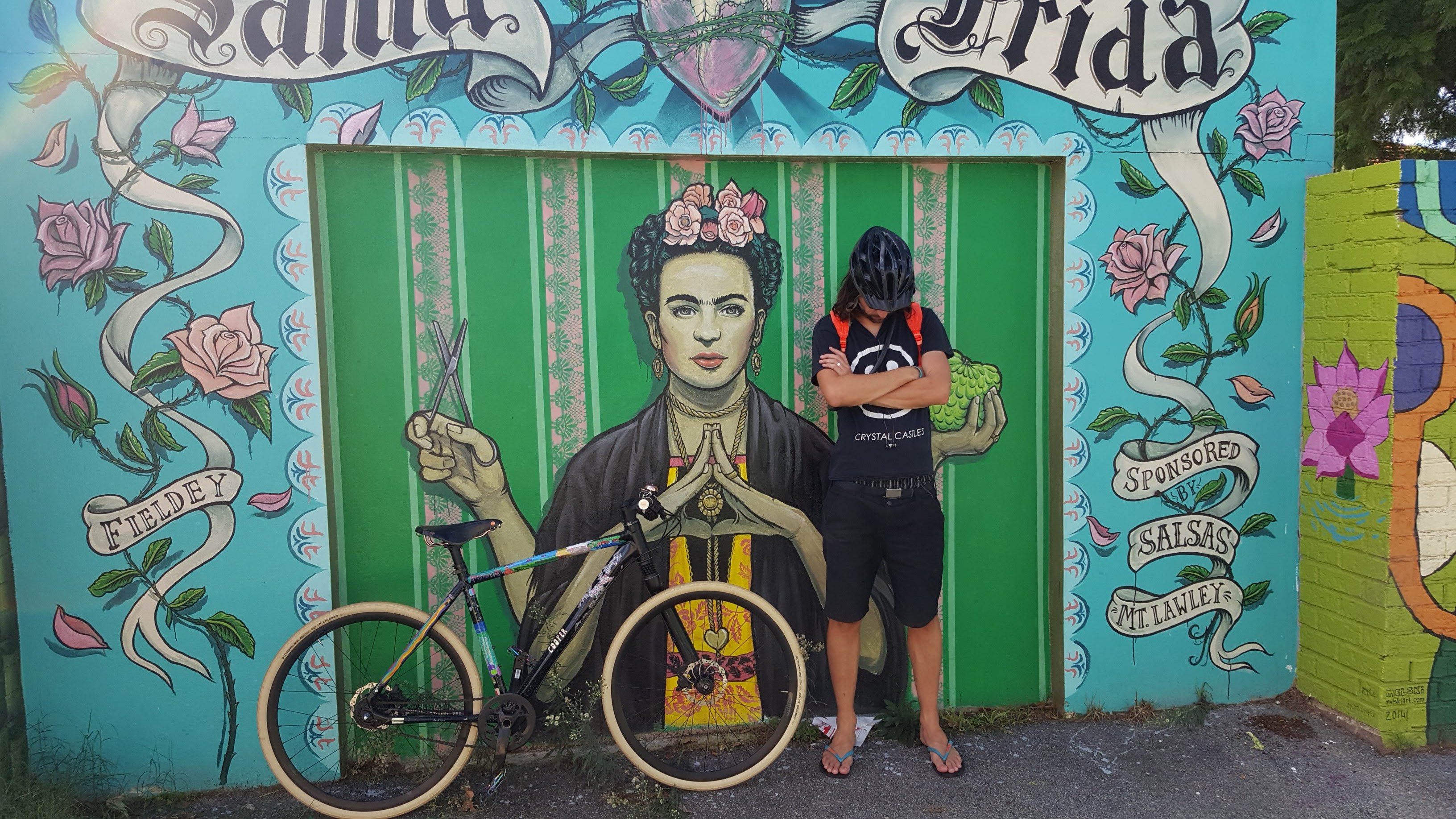 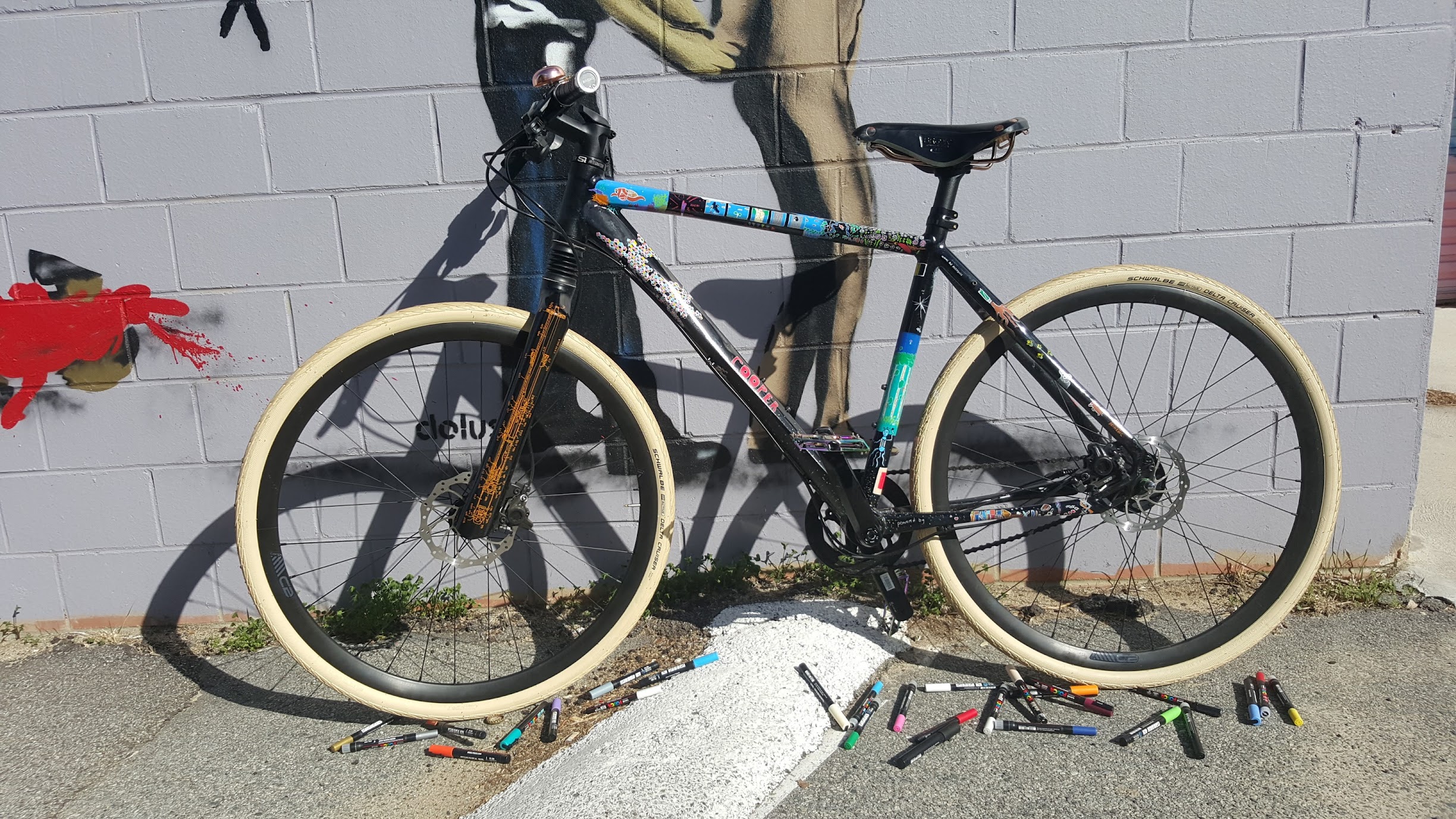 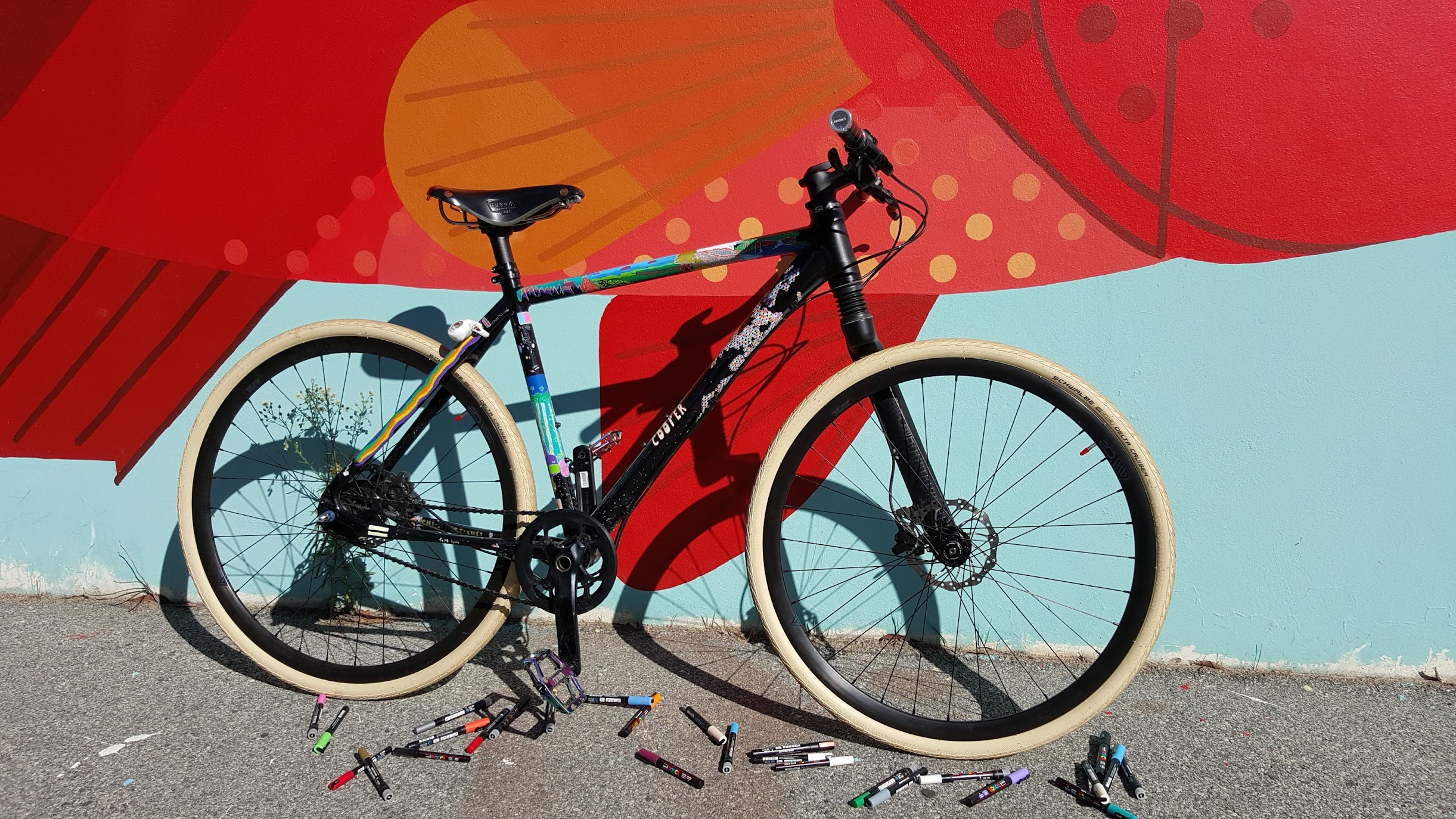