A man leaves the comfort of home to search an abandoned spaceship in the Australian desert for something of immense power. But what's it for?

He bent over. A single drip of sweat beaded, wobbled then fell off his nose. He watched it sizzle on the cracked, scorched earth before it quickly evaporated away.

He looked up. Another two days walk. At least he thought to himself. The shimmering image of the giant structure stuck out in the distance. The cracked salt lakes crunched under his foot. This was harsh country. He plodded along. His leg continued to give him grief. The medicine men of the last few camps all promised they could heal it for a decent trade. None of them fixed it and his pack was a lot lighter.

But it didn't matter. He needed to find the final piece. It was rumoured that the giant structure remained un-pillaged. It was said the salt flats were to boggy for vehicles to get across. Because of that people were unable to scavenge anything of value.

A simple rumour was all he needed. His machine required it. He had worked for nearly 10 years, in secret, to get his machine working and he wasn't going to give up now. He left in the dead of night, his family still all asleep. All comms and injections cut out with a pair of scissors. It was so easy to track each other these days. Hence the walking. Any bikes or vehicles would be loaded with uplinks. Where he was going even the net didn't know about it and he wanted to keep it that way.

He came across some people sitting under a rock, waiting out the unbearable midday sun. They merely nodded from beneath faded Akubras. The sun melting any enthusiasm to chat. He admired the way they lived. They lived by the moon and the seasons. They chose to not integrate into the net. Some would come for months, then go back. Others would stay lifetimes. They cared for country and in turn they were some of the happiest people he had ever met.

He dragged his now dead leg on. The sun beat down on him draining him of all his energy. On sunset he came to a fence. Rusty and old with both the Australian government and US government badges on it. "No Entry. ASIO and NSA directive". His fingers reaching through the fence he felt his last breath of energy leave him. He stumbles forward onto the fence, his body slumping as he gives in to the immense heat.

He awakes to a black sky. The stars brightening the horizon. Crackle, crackle. Rolling over he notices he is next to a fire. Coming too he realises he is freezing. Bodies sit next to the fire.

"Oh finally. We thought you were a goner old man."
"oooh- oh what happened?"
"We found you all crumpled up next to the fence. What were you doing ya silly bugger?"
" I - uh I need to get inside." He is trying to get up. Holding his head that has dried blood on it.
"Woah now. Come sit. Your not going anywhere for at least a few hours. You mean you want to get inside the old Orion?"
"Yeah. I'm on a deadline"
"Why you would want to go into that old rust bucket, I dunno mate but righteo. We have some food we can share with you. Tomorrow you can set off. Come now. Sit"
"You're, you're too kind"
"what's ya name old man?"
"Mon- Its Monis"

Next morning. The huge building looms overhead. Monis is looking at it. It's on a lean. On the side is written "Orion - Super Ark"

Monis is walking around it. No entrance. He is getting frustrated. "Let me in damn it!" He is banging on the rusted metal hull. SFX: Bang bang. "LET ME IN!!! ARRGHHH" he is yelling on his knees. Stillness.

Walking round the back one of the enormous engines sits on the sand, twisted and bent as the Orion spaceship fell on her struts. Monis is climbing up into the blackened exhaust. He is squeezing through a tube. 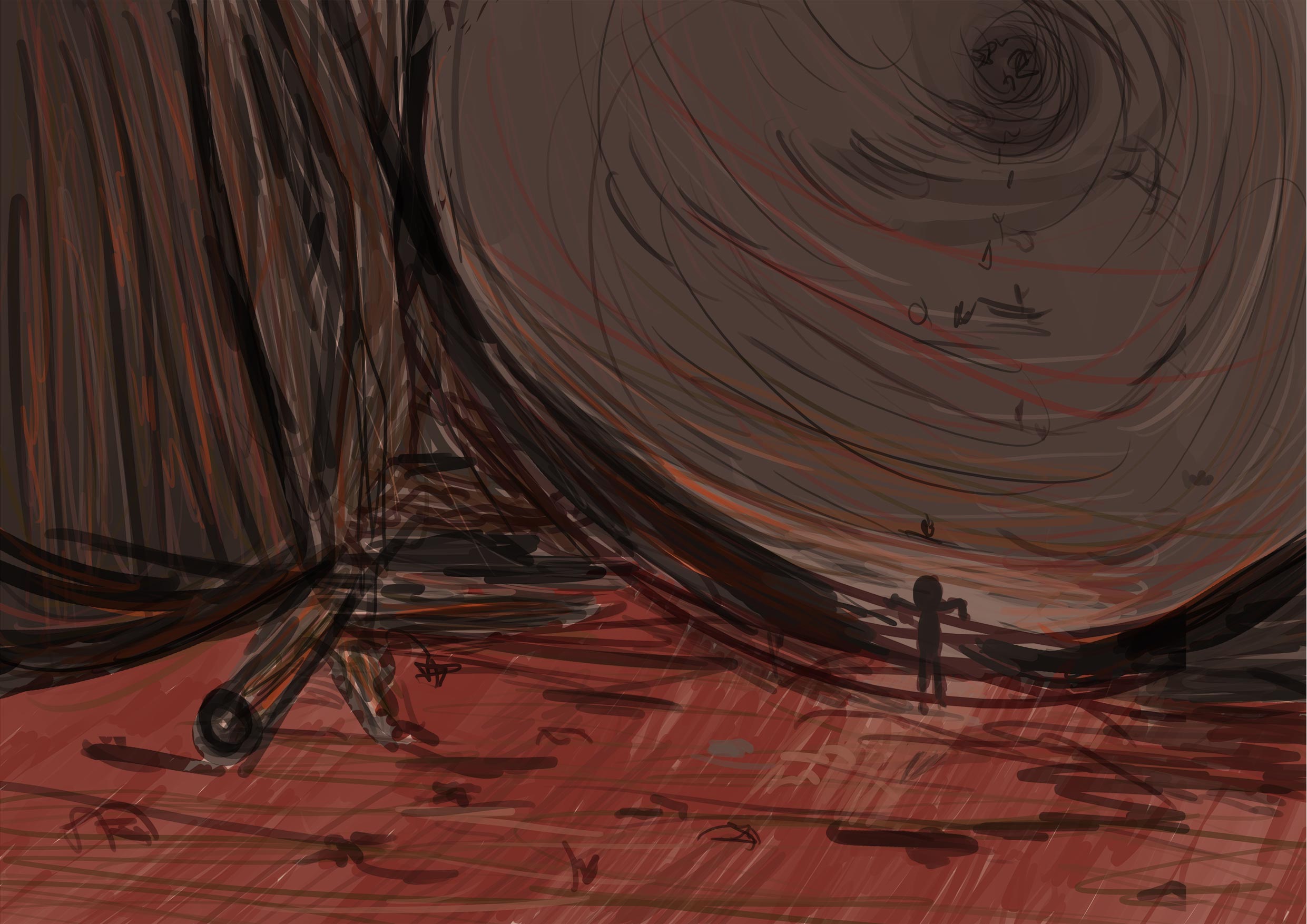 He is in. The vast engineering bay opens up around him. Dropping some balls onto the ground he clicks them. They spring into life with "zzrt" throwing light everywhere. They follow him as he walks, unfolding a blueprint. Classified reads over the document. He taps a point on the map then scratches his chin.

He is standing around a mass of cables going into a ball. He is kicking it. The rusted out thing won't budge. Eventually with a big heave it snaps out. "Core. Danger. Radioactive" It reads. Monis smiles to himself.

Monis is standing on a walkway, a large backpack loosely slung over one shoulder. Glass panels and the scent of gum trees fills the air. People are mulling around, busily filling the day. Laughter and gossip fills the air. A projection rises up above the trees "Intergovernmental Meeting Today". In the background sits the Earth, huge and filling the vista.

Monis smiles and closes his eyes. Reaching into his pocket he clicks a button.

Outside the two huge space stations which are docked with one another an explosion rips through the side of one, spewing debris into space.

"180 people were killed today in a suicide bombing as a far right activist protesting the Intergovernmental Meeting exploded a backup nuclear device. Official sources say the meeting will go ahead and people are advised to avoid the port side of decks 18 through to 24 while urgent repairs are undertaken on Southern Cross.
In other news a kitten was found in a hyper scrubber today as 9 year old Matilda ..." 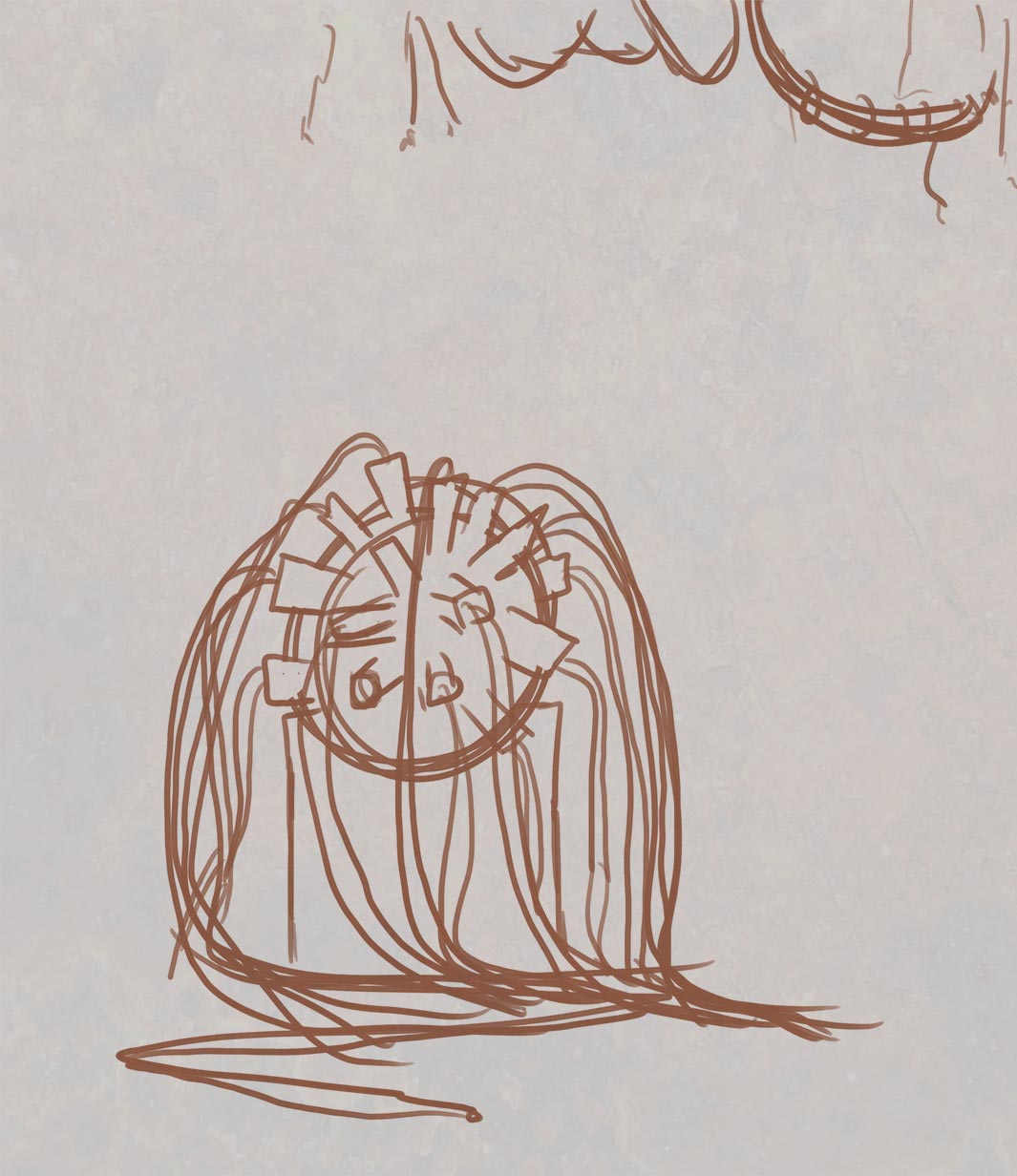